I have been getting trained in Indian Classical Music – vocals, for a few years now. One of the sadhanas for the advanced students in Indian music is called a Chilla. Traditionally in this sadhana, the musician had to remain in isolation for a period of 40 days in strict discipline to achieve a very high level of skill, which cannot be achieved by normal practice.

My teacher has us do a lenient version of this sadhana, by giving a particular phrase to practice everyday for 40 days, 4 hours per day continuously, at the same time each day, sitting at the same place, and in the same posture without moving. Since I was doing it for the first time, I was given a kind of a mini-Chilla to do for 15 days, with 3 hours of daily continuous practice. If, even by mistake, we broke any of these criteria, I had to start again from day one. Typically the first practice my teacher gives is to chant AUM on the first note. I was given this practice as a sadhana for my Chilla.  I was allowed to move my head if needed, and also the 2 fingers with which I was to pluck the strings of my tanpura. The rest of the whole body was to remain still.

Luckily for me this time coincided with the time I was learning meditation at Ananda Sangha in Delhi. I had finished my Raja Yoga course and had a couple months break before starting the next course level. It was during this break I was given the Chilla to do. While doing this sadhana, I was reminded of the third stage of Patanjali’s eight fold path, Asana, about which Swami Kriyananda writes in his book ‘The Art and Science of Raja Yoga’. Swamiji says that ‘a sign of perfection in asana is the ability to sit perfectly still, without moving a muscle, for three hours’. 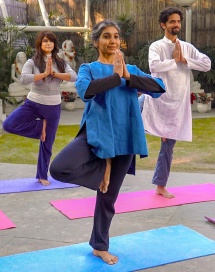 I did my Chilla sitting in a cross-legged position with my spine straight and my tanpura lying on the floor before me. Even bending/relaxing the spine was considered a movement which would break my sadhana. Except my head and the two fingers to play the tanpura, no other movement was allowed.

I realized that sitting still was not so easy. Usually when we know we’re not supposed to move, distractions happen the most: like feeling an itch in a body part, or hair touching the face, or cramps/numbness in the knees and feet, a mosquito troubling, and/or the bladder full and wanting to use the washroom. All of these things happened to me.

The first couple of days were quite a struggle. I remember on the first two days, my knees started to pain badly while sadhana was still going on. I was not yet used to sitting cross-legged for so long. But doing Paramhansa Yogananda’s Energization Exercises before the starting the sadhana really helped. Gradually with each passing day it became a little easier. Small things like mosquitos or  hair flying on the face did not matter anymore. I was able to control and bring my attention back to what I was doing more easily now. On the 10th day I remember after 1.5 hours, with 1.5 hours  remaining, I urgently felt the need to use the washroom. That day I felt I may have to break my Chilla,  as it seemed beyond control. I used to keep a picture of my guru Paramhansa Yogananda ji in front of me while doing the sadhana. That day I looked straight into His eyes and prayed to him for help. Soon, even though the urgency was still there, I was able to control and continue. I was thrilled that my sadhana had not been broken.

I felt this practice of chanting Aum for three continuous hours created an aura of purity, calmness and inwardness within me and all around me. Although moving the head was allowed for me, I did not need to do this anymore. In fact, making any movement now felt unnecessary and distracting. The three hours that seemed so long in the initial days, seemed to finish too quickly in the later days. I was getting deeply absorbed and enjoying it. 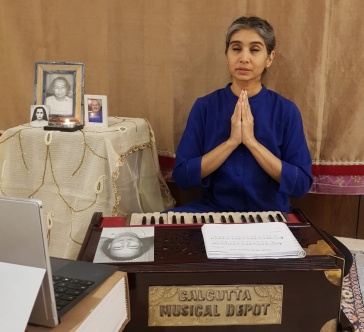 For the first time I understood what is meant by “withdrawing energy from a body part.” Whenever I felt a distraction, I would consciously pull all my attention away from that body part, and fix it deeply at the spiritual eye (Kutashta), and concentrate on the chanting of Aum. I distinctly felt the energy withdrawing from that body part, and that distraction magically disappearing completely. This technique came very handy each time.

I use this technique now, whenever I feel an impulse to move, and I avoid moving as much as possible during meditation. This sadhana has helped me to discipline myself and learn to sit still during meditation and gain control over my bodily movements.

Yoganandaji says “stillness is altar of spirit”. My Chilla, and other forms of spiritual practices begin when the outward pull stops, and my energy is withdrawn substantially within. This phase was a great test and learning for me. I was able to put everything I learned in Raja Yoga to practice: Pratyahara, Asana, Tapasya.

And I was able to successfully complete my Chilla !